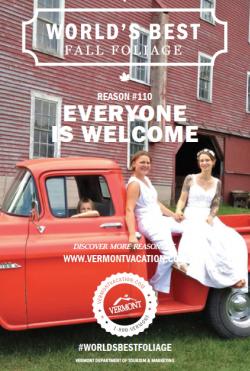 #Vermont has received more than its fair share of snow this winter – all the better for a trip to Sugarbush – a go-to destination offering 111 trails for all levels of skiers.

Vermont’s first-in-the-nation law requiring the labeling of foods made with genetically modified organisms could cost the nation’s grocers up to $10 million a day in fines, according to a letter from an industry organization that is suing the block the la

Vermont was the first state to legally recognize gay couples when it created civil unions, and the first state to pass marriage equality through the legislature.After years of watching other states attempt to position themselves as autumn destinations, Vermont has thrown down the gauntlet and declared itself the home of the World’s Best Foliage.”No one does foliage better than Vermont,” declared Vermont Governor Peter Shumlin. “Three-quarters of our state is forested, and we have the highest percentage of maple trees in the country. With our flaming reds, blazing oranges and glowing yellows, we have the most vibrant fall colors in the world.”In previous years, states as far away as Michigan, Pennsylvania, and Arizona have claimed their fall season was as pretty as Vermont’s. “Clearly, we’re the bar,” said Megan Smith, Commissioner for the Vermont Department of Tourism and Marketing. “Our fall advertising campaign will articulate the myriad of reasons we have the World’s Best Foliage. Our hope is that people will be inspired to come see it for themselves.”Smith added that Vermont’s fall campaign isn’t just about bragging rights. Visitors spend $460 million during the foliage season, which represents about a quarter of overall visitor spending each year. Nearly 3.5 million people #travel to Vermont in the fall to experience its unique working landscape of bucolic villages, pastoral meadows, and forested hillsides.To help visitors plan their trip during “peak” season, the state’s official tourism website, www.VermontVacation.com, will offer weekly foliage reports, Best Bets for driving tours, and a foliage tracker. The website will rely on information from the state’s Department of Forests, Parks and Recreation and its commissioner, Michael Snyder. Snyder is a well-regarded forester, and with over 30 years of professional experience, has earned the title of Vermont’s official Foliage Forecaster.”Predicting fall’s color changes is part science and part luck,” admitted Snyder. “We know the science of color change and the factors that influence it, but we don’t know exactly how it will unfold in any given year. The good news is, our foliage is like a day on the slopes — when it’s good, it’s great. And even when it’s a bit off, it’s still really good.” Snyder says Vermont’s abundant spring rain and summer sunshine have created the right conditions for a spectacular fall in 2015. 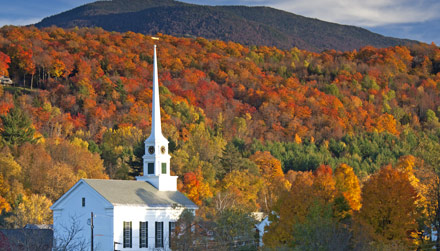 Sprawl has no place here. Highways are devoid of billboards by law, and on some roads cows still stop traffic twice a day en route to and from the pasture. In spring, sap boils in sugarhouses, some built generations ago, and up the road a chef trained at the New England Culinary Institute in Montpelier might use the resulting maple syrup to glaze a pork tenderloin.

It’s the landscape, for the most part, that attracts people to Vermont. The rolling hills belie the rugged terrain underneath the green canopy of forest growth. In summer, clear lakes and streams provide ample opportunities for swimming, boating, and fishing; the hills attract hikers and mountain bikers. The more than 14,000 miles of roads, many of them only intermittently traveled by cars, are great for biking. In fall the leaves have their last hurrah, painting the mountainsides a stunning show of yellow, gold, red, and orange. Vermont has the best ski resorts in the eastern United States, centered along the spine of the Green Mountains running north to south. The traditional heart of skiing is the town of Stowe. Almost anywhere you go, any time of year, it will make you reach for your camera.

Because of its beautiful, mountainous terrain, Vermont travel is most beloved by avid outdoors travelers who are seeking the perfect location for either hiking during the warmer months or skiing during the winter. When autumn visits Vermont, there might not be a prettier state in America—the leaves turn brilliant shades of orange, red, and yellow. Visitors to Vermont will love shopping at Manchester Center, touring the beautiful countryside and indulging in the state’s famous cheeses and maple syrup. Read more in this Vermont travel #guide.

• The Burlington Waterfront and Church Street: walk around this charming area, which is home to numerous art galleries, retail shops, and eateries with live music.

Vermont has cold winters and warm, humid summers, due to the proximity of Lake Champlain. Autumn, with its gorgeous bursts of color, is the best time to visit Vermont. If you’re feeling adventurous, travel to Vermont with a bike or your hiking shoes, so you can take advantage of the state’s many scenic trails.

Matt Canning might just have the best job ever. The son of two craft beer enthusiasts, the Vermont local has taken his love of brew and turned it into a unique career—the beer concierge at Hotel Vermont in Burlington. “I’m a beer enthusiast who fo…

By area, Vermont is the sixth smallest state in the United States; by population, it’s the second-smallest. But travelers shouldn’t sleep on the Green Mountain State—with its beautiful foliage, resplendent ski resorts, quaint hamlets, and delicious food, this New England gem has something for everyone.